Category: FEEL ON THE WRIST

Hands on the Omega Speedmaster Moonwatch 3861

Finally, we had the opportunity to try the new Omega Speedmaster, it was a long wait due to the lockdown, however and without wanting to anticipate it now we can say that the wait was well worth it, as we loved the new Speedmaster and there was one of the variants that we liked the most, but later on we will address the issue.

Before starting, it should be noted that we are not going to do any revision of the new Omega Moonwatch, which we already had the opportunity to do at the time of its launch, so we leave the link here if you are interested.

Aesthetically, the new Speedmaster is not surprising at the level of the case and dial, with some small “big” details that certainly went unnoticed by the general public but that will delight many of its fans. The most evident change in the dial is in the chapter ring where the minute-track now has three divisions in contrast to the five divisions of its predecessor, and which is only due to the frequency of the new movement, yet on the dial another of the evidence is the pointer of the second’s hand that is now thinner and whose arrowhead is now longer and about the dial has little more to say. It is in the aluminum bezel that we find one of the gems of this watch, we are talking about the position of the “famous dots” of its tachymeter scale, which now boasts the Dot-over Ninety and Dot-lower right Seventy, which recreates the bezel of the original Omega Moonwatch.

The main aesthetic novelty of this new Speedmaster Moonwatch is undoubtedly the new bracelet, it is the star of this launch, not only because it is beautiful, giving a level of elegance to the Speedmaster Moonwatch never seen before and that invokes at the same time a vintage look, but also because it is extremely comfortable on the wrist. The new bracelet is tapered from 20mm to 15mm with the traditional 5 links, two interconnection fine links, and three wide with a brushed finish, only interrupted by the side polishing and the interconnection links which also have a polished finish, but only in the sapphire glass variants. The clasp that is now more appealing with engraved long strokes and with an applied symbol comes with micro-adjustments that make it easier to adjust it to the wrist.

It is in the movement that the second biggest novelty lives, the new Caliber 3861 comes with Co-Axial escapement and for the first time with Master Chronometer certification by METAS, which attest among several characteristics, the chronometer movements and resistance to magnetic fields (by COSC) according to certain specifications.

Which one we liked the most

We had the opportunity to be with the four variants, both in steel, one with Hesalite glass and the other with sapphire glass, and with two in gold, one in 18k red gold (Sedna Gold) and the other in white gold ( Canopus Gold). In addition to the evident differences between the steel variants and the precious metal variants, what we noticed most was the difference in weight, with the steel variants weighing around 138 grams and the gold variants weighing between 219 and 235 grams respectively, which makes a difference in the pulse.

We are by tradition and that is why for us the Speedmaster Moonwatch will always be what a tool watch was designed for, which is why we prefer the steel variants and although the sapphire variant has an open case back, applied logo on the dial and sapphire glass, we continue to prefer the Hesalite variant, not least because it is the closest version to the first Moonwatch, but also because its bracelet features a uniform brushed finish in this version, which we love.

Regarding the gold variants, we also liked to highlight the dark color of the red gold variant, largely due to the incorporation of copper in its composition, which at first we may find strange, but which we have become accustomed to. It should also be noted that the gold versions of Moonwatch that existed until today were only limited editions and that they are now available as current editions, although limited to certain boutiques of the brand.

Finally, we emphasize that regardless of the chosen variant we have to say once again that the new bracelet is really the big improvement of this new Speedmaster and that we would not be surprised to see in the near future many of the owners of previous editions of this watch running to the boutiques to buy the new bracelet, because undoubtedly they will win a different watch on their wrist.

Seventy-seven years ago, when Hamilton the most respectable American watch brand took the hard decision to stop producing watches for ordinary people to supply the high demand (more than a million of watches) of American Armed Forces on World War II, probably never thought that simple field watch would become one of the most successful top sales.

Since then many things have changed, Hamilton “became” a Swiss watch brand, part of the prestigious Swatch Group, and the Hamilton Khaki Field watch model have expanded to different versions, with new dials, new cases, new movements and new complications.

But today our eyes will be focused on just one special model, the Hamilton Khaki Field Mechanical, based on military model GG-W-113, and what better option than talk about the new version with the white dial.

We wore it during a week, and it‘s a watch with very accurate time, with a power reserve over 80 hours (we would say 85 hours at least), elegant and suitable in different occasions and environments, and it is very comfortable on the wrist.

Concerning technical specifications, this watch is equipped with H50 caliber, mechanical hand-wind movement, a steel brushed case with 38mm diameter (which is perfect for any wrist size, even the thin ones) and 9,5mm of thickness, big crown, simple dial marked (ancient font) with 12 and 24 hours in military-style, non-date, luminous hands, water-resistance up to 50 meters or 5 bar, sapphire crystal, drill lugs (we would like all watches could come with it), 20mm lug width and a military green textile strap NATO with some leather insertions, also available with a leather strap, available from a price of €425. 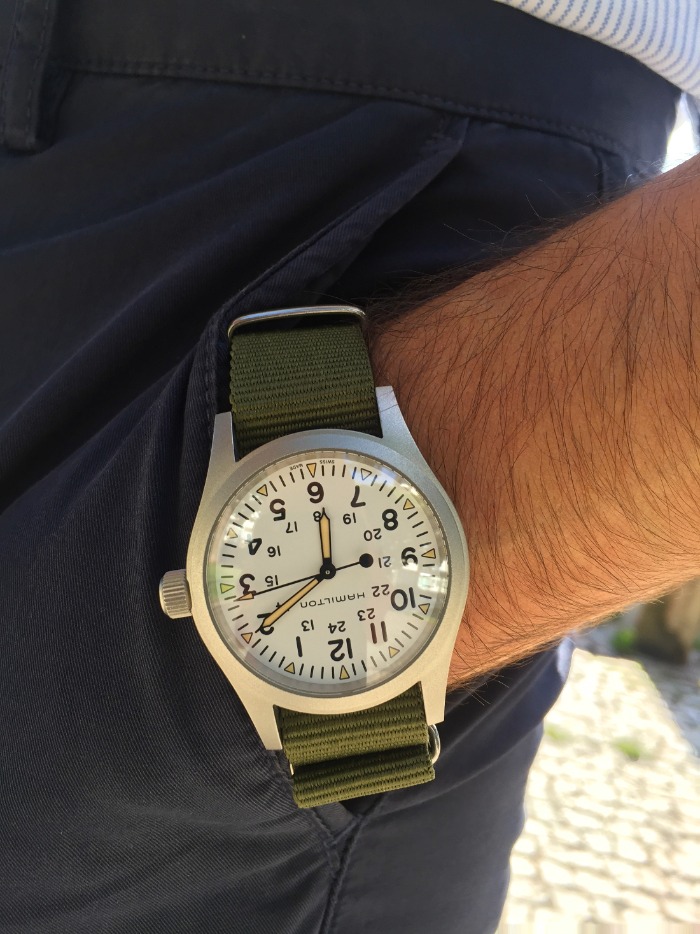